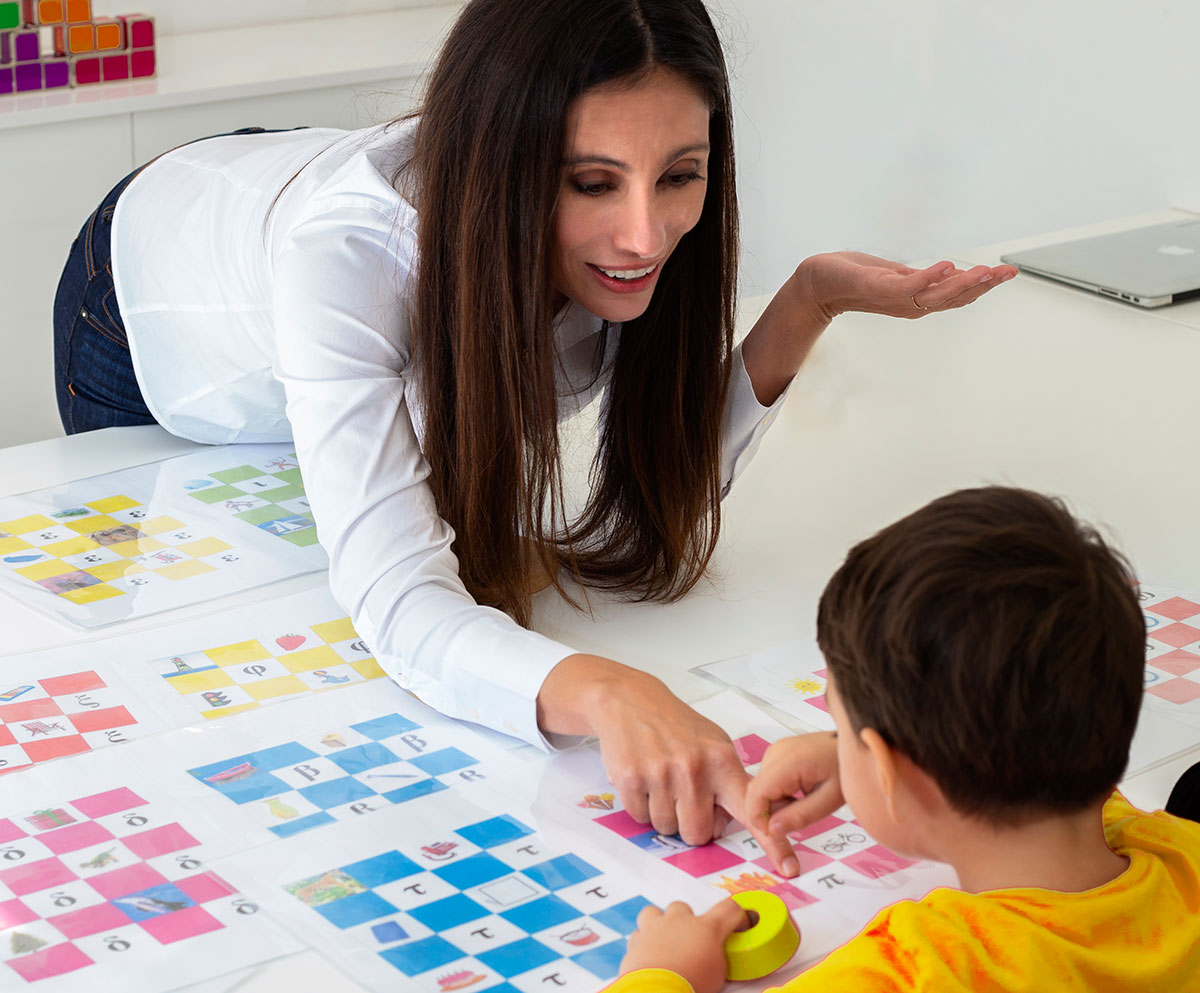 “Phonological awareness, also referred to as phonological sensitivity, comprises the ability to recognize, identify, or manipulate any phonological unit within a word, be it phoneme, rime, or syllable”

Ziegler and Goswami conducted a study on reading development across different languages. They explained that in order for a person to become literate, he should be able to connect visual symbols with sound units. Therefore, a whole new system of mapping between symbols and sounds is acquired. Once the learner has mastered this system, he has access to many other words since the process of phonological recoding is activated. Scientists wishing to evaluate the level of phonological awareness prior to the act of reading used a variety of research methods.

Ziegler and Goswami observed that in most languages, preschoolers with normal linguistic evolution experienced no difficulties on phonological awareness of syllables, onsets and rimes. They detected syllable awareness by the age of 3 to 4, while onset and rime awareness was present between 4 and 5 years old. They also discovered that phoneme awareness develops only when teaching of reading and writing is started, irrespective of the age. This also explains why illiterate individuals perform poorly in phoneme awareness tasks.

In most researches, scientists separate the participants (children with low or nonexistent phonemic awareness skills) into two separate groups;

Numerous studies on this topic in their majority confirm that the groups receiving phonemic awareness instruction subsequently did much better in reading development than those who did not receive such training (Hoover, 2002).

Karpathiou and his colleagues also have observed major improvement in reading after phonemic awareness training. In addition, they reported significant progress in other skills such as mathematics (calculations) and a remarkable amelioration in the children’s ability to concentrate during learning (Karpathiou et al.,1998).

Children benefit a great deal when they are explicitly taught letter-sound relationships, and made to sound out words. Word processing takes place at the letter level therefore children should be encouraged to pay attention to all letters in a word and also to be able to repeat words they have not heard before. Can children benefit from being instructed abstract rules such as “when a suffix is attached to a word, and the final consonant is doubled, the vowel remains short?” (Hoover, 2002:3). Hoover considers it unlikely.

In the same vein, Wren says “another weakness of these rules is that skilled readers clearly don’t follow these rules as stated. If they did, they would not be able to pronounce pseudowords like FINT, KINT, ZINT, DOLD, VOLD, and POLD. There are apparently two conflicting rules here — sometimes the vowel is long, sometimes it is short” (Wren, 2007:1).  Which is the proper rule to apply with new words like the ones above? The first three nonsense words have a short vowel. The second three have a long vowel. Why aren’t we confused about how to pronounce these words given that the rule seems ambiguous? (Wren, 2007).

When they evaluated these children after the phonological training, Lundlerg and colleagues concluded that teaching phonological awareness in preschool children ameliorates reading and writing skills (Lundberg et al.,1988).

In the following year Schneider and colleagues analysed the same data by raising the very crucial question of whether children with a limited level of phonological awareness could benefit from the training programme. It was shown that even children with weak reading skills performed better in reading and writing than the controls did (Schneider et al.,1998).

Karpathiou and colleagues also refer to the benefits of phonological awareness and phonics instruction training in preschool children and its important contribution to early reading. They used the basic principles of phonemic awareness and phonics instruction to create a twelve-book method designed to treat kindergarten and first grade pupils with evident speech problems, limited phonological awareness, attention deficit disorder or suffering from dyslexia (Kapathiou et al.,1998). For the past 15 years, kindergarten children have followed successfully specialised phonological awareness and phonics instruction training programmes, in Athens Neurolinguistics Center (ANC) under the supervision of this researcher who operates as an individual therapist and founder of ANC. The children are referred by kindergarten or elementary school teachers. The training takes place once a week in the neurolinguist’s office and lasts sixty minutes of one-on-one interaction with the therapist. During the entire phonological intervention period, parents are requested not to interfere with the linguistic treatment and no additional help or support is required from the family or school. The time needed for phonemic awareness acquisition varies depending on the child, his level of maturity and linguistic competences. Karpathiou and colleagues suggest between thirty and forty sessions of specialised training for the child to acquire full control of phonological awareness, thus to be able to recognize, identify, differentiate and associate letters and phonemes in all possible combinations. All the children that have followed the specific training programme have shown significant improvement in linguistic and phonemic skills and have learned to read before entering the first grade. Reading acquisition is accomplished in a discrete and effortless way for the young child.

Karpathiou and colleagues believe that the Greek educational system devotes an insufficient amount of time to teaching how to read.  Thus, the majority of grade 1 students with linguistic or attention deficits fail to master the process of reading in the time their first grade teachers expect them to. Consequently, some young children experience reading as a stressful condition, they are discouraged and therefore fall behind their peers. To prevent such unpleasant situations for the child and his family, it is suggested that phonological awareness and phonics instruction training, given one year before entering the first grade, shall contribute significantly in reading acquisition and will prevent reading disorders (Karpathiou et al.,1998).

Keilmann and Wintermeyer hold a different view to that of Lundberg, Schneider and Karpathiou regarding the importance of phonological awareness training for reading. In a recent study, Keilmann and Wintermeyer argue that specialised phonological awareness training for preschool children is unnecessary. To reach this conclusion, they differentiated their study from all the previous ones conducted on the benefits of phonological awareness. They did so by training both groups participating in the research in contrast with those in Lundberg and Schneider’s study, where only one group was trained. (In Karpathiou and colleagues’ case, conclusions were based on observation).

Keilman and Wintermeyer based their research on the premise that valid comparison can be drawn only between groups who have received different training. The research involved 218 preschool children, divided into two groups: the one was given phonological awareness training to prevent dyslexia while the other received non-specific general perception training. Kindergarten teachers administered each of the training to the children for six months period prior to their entering school. The teachers themselves were trained by a speech therapist who also supervised the entire procedure. At the end of the training, a comparison of the reading competences of the two groups indicated no significant differences in reading ability. However, they discovered that children who had a history of hearing loss or had pathologic middle ear findings benefited more from the specialized phonological awareness training programme and had improved their reading abilities significantly (Keilmann & Wintermeyer, 2008 ).

Based on the above results, the researchers suggest that “A specialised training programme to improve phonological awareness as a basis for reading and writing in every kindergarten and preschool child seems to be unnecessary. However, children with temporary hearing deficits benefit from such a programme. For all other children general perception training may be sufficient” (Keilmann & Wintermeyer, 2008:73).

The conclusion of the study is consistent with the specific remarks on phonological awareness formulated by Cunningham and Hatcher, who argued that “training of the phonological awareness in isolation from reading and spelling may be much less effective than [is the case] with first graders who are learning to read” (Keilmann & Wintermeyer, 2008:77).  Keilmann and Wintermeyer did not use letters to work on phonological awareness, which probably explains why only children with hearing disorders benefited from this training, in contrast with children suffering from speech and language impairment, who showed no improvement after training.

The phonological awareness training used by Karpathiou and colleagues mainly consists of phonics instruction, letter- phoneme association. It is designed to interfere with and treat speech and language deficits in preschool children by making them phonologically aware of the sounds of their first language and teaching them how to read in an effortless, even in a somewhat implicit way (Karpathiou et al., 1998).

Based on the above results of the studies, it can be concluded that further investigation on phonological awareness training in preschool children is advisable. It follows logically that researchers and speech therapists also should agree on formulating a standard specialised phonological awareness training programme designed for kindergarten children.

This site uses Akismet to reduce spam. Learn how your comment data is processed.